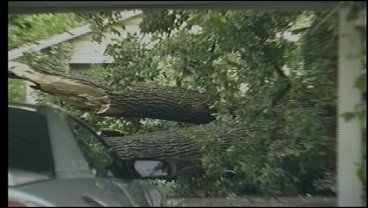 A wrap of storm damage from August 5th across Texoma.

Starting with some breaking news out of Atoka County, at an area already hit with storm damage this afternoon. Crews have responded to the scene of a gas well fire.

It happened around 9:30 p.m., west of Atoka, on White Dove Road, near Highway 7. Officials believe lightning hit the gas well, causing the explosion.

No reports of anyone hurt, but this isn't far from where we reported storm damage to homes earlier Wednesday afternoon.

We do know, officials called in a specific crew from the Ardmore area with a foam truck to try and get those flames out.

As far as power outages, here's what it looks like in Oklahoma as of Wednesday night: Calera, there's still 147 people without power. In Colbert, there's 60; more than a thousand people still without power in Durant; and, 95 residents without power in Kingston.

According to Dean Pollack, of OG&E, because of equipment failure, there's a substation northwest of Durant out. Officials expect to have that up by midnight.

In Kingston, there are seven large poles down in the Caney Creek area. They will be out overnight, possibly longer.

Now, in Texas, Todd Thompson, with Encore Electric, says they're down to less than 8,000 people without power in the Grayson County area.

All critical care facilities, such as the hospitals and schools are back on. There is a tremendous amount of traffic signals that need to be re-set. Crews are working through the night to get power restored

It happened at the east building -- it's the temporary location for campus police -- used to be the criminal justice building.

The roof of the older building was partially destroyed. The front part blew off and into the building next to it. Officials with the college say there is quite a lot of water damage.

Also, the old radio tower, which is now used for some Internet communication, toppled over and fell on top of part of another building.

Power and gas was turned off to the entire campus as a precaution. So, it was hard to assess the amount of damage because it's just too dark. Power has since been restored.

Atoka now, where afternoon storms downed power lines and tore a roof off -- even destroyed a trailer home.

Southeastern Electric crews are still working tonight to get power back up and running to residents on a small stretch of Chicken Fight Road in Atoka.

"As soon as the storms started getting real bad, I got in the bathtub for about 10 minutes," says Riley Evans, of Atoka. "Then, I heard an awful racket, and I thought the windows had busted in. But, it was just the roof coming off."

Fourteen-year-old Briley Evans was home alone when the storms hit and says he wasn't too scared -- even when the power went out, and part of his roof and porch blew away.

Nearby, neighbors on top of that hill suffered damage as well, to a travel trailer home in their yard. No one was inside at the time.