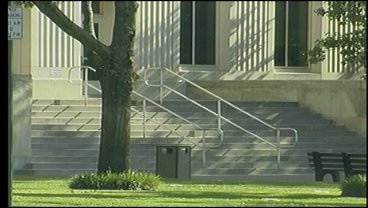 What does this mean for the economy in downtown Sherman?
The jail has been a mainstay in the district for years.
Michelle Gillespie reports that a group of business owners have come together to preserve and protect the downtown area.

They held a meeting Tuesday night to draw up a comprehensive plan of what they want the downtown to look like and now that the Grayson County jail is set to be moved from downtown, they're looking at what they can to do to minimize any negative effect it may cause business in the area.

"It's concerning and we'll just have to wait and see," says Ivert Mayhugh. Mayhaugh owns 'A Touch of Class', the antique store, on the other side of Crockett Street from the Grayson County jail but now that county commissioners have voted and the jail is set to be moved to 90 plus acres in east Sherman, he's worried about business.

"Will the court's follow the jail? Will the lawyers follow the courts? And if that's the case--we're going to find ourselves possibly with an empty downtown and no reason for people to come down here," says Mayhugh.

And now Mayhaugh and his wife, Jeanette, are voicing their concerns but not to commissioners or the city, they, and a number of other retailers, are coming together to look to the future of downtown with or without the jail.

Baca is leading a group called "Sherman Downtwon Now", it's a group of concerned business owners in the community coming together in hopes of revitalizing the downtown district.

"I think we need another good restaurant and some good retail traffic to bring mroe people down here," says Josh Hansard, a Sherman business owner.

And that's exactly what Baca hopes to accomplish--more retail shops, restaurants and nightlife and he says the key is more residential living.

"Like I said, I think the residential is going to add a lot to the downtown area and I think that's going to be the key to the success of whole project," says Baca.

Tuesday's meeting was the second for this group and David Baca says they hope to have many more where they'll hear more input from local residents and then eventaully present a plan to the city within the next six months. We'll of course follow up and keep you updated.
Michelle Gillespie, KTEN News.