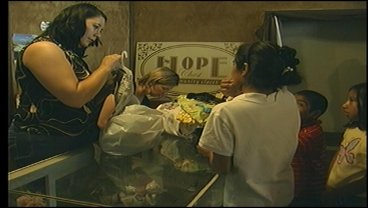 There's a new store in Durant, and get this, everything in it is free! KTEN's Vanessa Bolano stopped by to see how it all works.

It's called "Hope Chest," and they rely on people to donate items so that they can in turn pass them on to folks who are in need. There's no money involved, instead it's all based on a point system.

Basically, depending on the amount of people in your family, your awarded points, and everything in the store has a point value. Founder Trish Burkhalter says it teaches people to maintain a budget.

Inside you'll find clothes, books, toys, and if you save up enough points you can get pricier items like furniture and kitchen appliances. The points are awarded on a monthly basis.

Burkhalter says the "Hope Chest" opened as a result of "Hands of Hope" closing.

"it's been a huge learning curve for us and we still feel like we have a lot to learn but we are seeing that the need is here."

Charles Sumner, who lives in Durant says, "it's giving people that actually don't have anything so it helps more that people think."

The store helped get Junior Frank Owens in a suit. He needed one to go to Oklahoma City to receive an award for his heroic acts in the school bus wreck in Bokchito.

At this time the hope chest is in need of donations and volunteers. They accept gently used or new clothing, as well as money.

If your interested in helping out just pass be the store. They're located on the 100 block of South 7th Avenue in Durant, OK.

They're most in need of clothes for kids that's back to school appropriate.