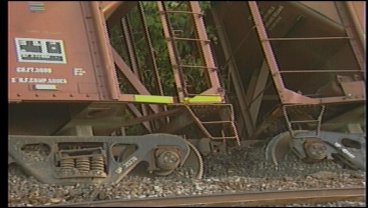 A train derailed in Denison overnight. It happened east of Armstrong.

No one was hurt, but the damaged cars are still blocking the tracks.

The tracks belong to the DNGO line which is operated by Rail America. We're told the company is wating on a crain to remove those cars, and then repair the tracks before opening up the line again.

No word on what caused the train to derail.