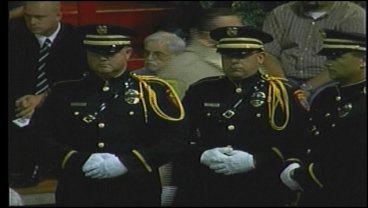 SEMINOLE, Okla. (AP) - Dozens of men and women in uniform have honored a deputy from Seminole who died in the line of duty.

Marvin Williams' funeral service Saturday was the second large funeral this week in Seminole County. Williams, a 43-year-old sheriff's deputy, and deputy Chase Whitebird, 23, were killed July 26 in the line of duty. Whitebird was buried Thursday.

Ezekiel Holbert, 26, faces murder charges in connection with their deaths.

Williams' brother, Willie Williams looked out at the more than 1,300 people at his brother's funeral and nodded his head in approval. Williams says it reflects what his brother was working
for -- unity.

About one third of those who attended were uniformed law
enforcement officers.

Marvin Williams is survived by his wife, four children and four grandchildren.