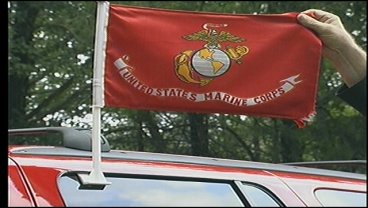 Honoring those who are fighting for our freedom today, now, to those brave soldiers who have in years past.
Michelle Gillespie reports one of those war veterans, a Denison native, had a reason to celebrate this week--when he achieved something he's waited nearly his entire life for.
Jim Haun never got his Denison Highschool diploma when he dropped out back in 1943 to join the Marine Corps and serve his country.
Now, at the age of 81, he can finally call himself a high school graduate.
Haun recieved his high school diploma from the Denison ISD board this past week.
He left Denison High at the age of 15, joined the Marines, and held occupation duty in Japan after World War II in 1946.
He went on to fight in both the Korean and Vietnam wars and somewhere in that time met his wife of 55 years, Connie, while she was working at a tomato factory in Washington, D.C.
And now, 66 years after he left Denison High School, he's finally home again, and officially a Yellow Jacket.
As for his plans for the future: "My wife says I can go to college now and get a good job," laughs Haun.
For now, Haun says he and his wife spend most of their time riding horses down in Fannin County--their favorite past time these days.