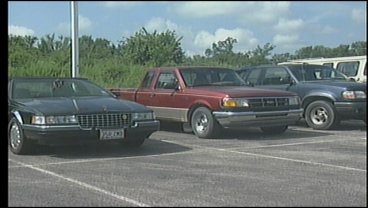 The extremely popular government program "Cash for Clunkers" is running on empty. Lawmakers almost had to suspend the program after only a week because of lack of funds, but now lawmakers are trying to pump more money into it. Deeda Payton reports on the impact it is having locally

The program is surpassing expectations, so much so, that the one-billion dollar program could be broke, but lawmakers say it will continue through the weekend. Now local dealerships hope lawmakers will add more money and continue the program because they say it is good for business and buyers. The House has approved adding two-billion dollars to sustain the program. The issue will go before the Senate next week.

One billion dollars spent in one week. That's what lawmakers believe has already been spent on the "Cash for Clunkers" program. "It's definitely had a significant impact on our business." local dealership owner, Blake Utter, says in seven days they have made seven deals and he hopes the program continues. "The longer this program goes and the more cars we can sell because of it. It only helps us, it can't possibly hurt us."

"Cash for Clunkers" is a government program which encourages trading in gas guzzlers for more fuel-efficient vehicles by offering up to a $4,500 rebate. "I've been looking to do it for about a year now, but the incentive was a big deal."

The program was only supposed to last until the billion dollars ran out or until November first, whichever came first. Which is why motorists looking to cash in on their clunker were nervous that the program would be suspended today. "Yes, I was freaking out last night and looked up CNN first thing this morning to make sure they hadn't gotten away with it."

Now, lawmakers are trying to add an additional two-billion dollars to keep it going. They say it will continue through the weekend, but some people were scrambling not only to make a deal, but understand the program.  Is it confusing? "Very, because they don't identify what a clunker is."

Mary Joe Lytton wasn't sure if her ford explorer qualified as a clunker. "What year is it? "2005." "I would imagine it's too new." But, to her surprise it meets the qualifications of a clunker and now she can trade it in for a new Ford Flex. And, get a 35-hundred dollar rebate. "Yay, I'm ready to go talk to somebody about getting my car traded in."

Mary Jo got a $3,500 rebate because she was trading in her old car for a new one which gets better mileage, four to nine miles more. She would have gotten $4,500 back if the new car got 10 miles or more to the gallon. Either way she is going to be driving off in a new, more fuel-efficient car, and getting cash for her clunker.

Now when you trade in a car for the program you will not get both the trade-in value and a rebate. Utter says it is one or the other. So, if you have a vehicle that is worth more than 45-hundred dollars than this program is not for you.