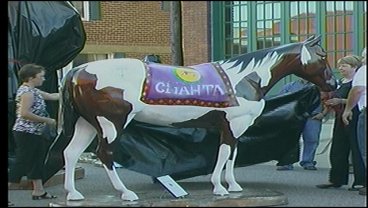 It was a big night in Durant, Thursday night.
The city's Chamber of Commerce celebrated it's 100th birthday and for the centennial event, the chamber held a block party.
Michelle Gillespie reports that the celebration focused on the achievements of the Chamber over the years but it also brought the community together with one goal: to expand and beautify their hometown.

The night started with a tour of the Three Valley Museum on Main Street.
From there, the crowd of nearly 60 people headed across the street to dedicate the newly renovated Mickels Law Office building, that's where the Durant Leadership council for the 2010 year was introduced.
But the highlight of the night, was just outside on West Fourth Avenue.
That's where five painted horse statues were unveiled--built and painted by local artists.
"Cities all around the country, and the world, have statues like these sitting around--you look for the next one and look for the next one, so it's kind of like a map of the city--it's an adventure," says Mike Ralls, owner of the Upper Crust Event Center in Durant.
"The horse represents that newness that we have--of where the south meets the west along with the colorful impact that we have in this community," says Mike Ridgeway, owner of the Durant Lumber Company.
"My wife appreciates the horses much more, because she's an artist, but I still enjoyed it and it's a wonderful addition to the city of Durant," says Randy Sullivan, owner of the Greenspray Grocery Store.
Five of those horses were unveiled Thursday night but Chamber officials say there are many more to come. They'll be placed all throughout the downtown area in an effort to give a little more culture to the Main Street area.
Also coming to Durant, a unique Smithsonian exhibit called "Journey Stories" that will open in January of 2010.
Michelle Gillespie, KTEN News.