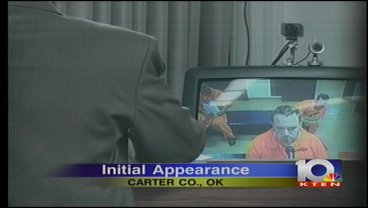 An update now to a story we brought you Wednesday on KTEN News at five.  Justice for the family of Jimmy Leon Fite whose body was dragged out of the Washita River two years ago.  Wednesday the Carter County Sheriffs Department made an arrest, Thursday that man appeared in court.  Meredith Saldana was there she has more on this story.

During his initial appearance Judge Tate spoke with Stevens over video conferencing from the Carter County Jail.

Stevens was taken into custody Wednesday around 4 PM.

Court affidavits state that Stevens has been a suspect since March of 2007.

Witnesses said Jimmy Fite had purchased a Cadillac from Stevens and after Fite's death Carter County deputies found the Cadillac in a pasture behind Stevens' house.

The affidavit also accuses Stevens of shooting Jimmy Fite in the face with a fire arm ultimately leading to his death.

Stevens preliminary conference is set for September 8th at 9 am.