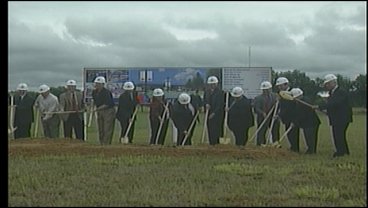 Durant is expanding and now, so is the school system. Thursday was the official groundbreaking of the new high school. Deeda Payton reports on what this addition means for the district and the community.

Superintendant of Durant Schools, Dr. Jason Simeroth, says they add about 50 to 100 kids to the roll every year, and the current facility just isn't big enough. In two years, though, they will have more than enough space. They say they are planning for the future.

As the band played, the dirt turned, all in celebration of the official groundbreaking of the new Durant High School on Gerlach Drive right off highway 69/75. "This is perhaps the most exciting thing in my career."

Simeroth, says it is going to cost between 37 and 39 million dollars to build the new facility. Money that, Simeroth says, is in the bank or well on its way. "We've been collecting sales tax for a year. The bonds are in their final stages of being sold."

He says the current facility has outgrown itself. "We are an expanding district. Each of the last five years, we've added 50 to 100 kids each year." There are 850 high school students enrolled for the upcoming school year and the new facility can hold up to 1100, plenty of room for future growth.

"This building is going to have the latest technology, all our classrooms are going to be smart classroms, so I think our teachers are beginning to realize the potential of that." And, faculty members aren't the only ones excited about the addition to the community. "It's going to be a tremendous boost not just for educaton for our children, but it's going to be a big boost of economic opportunity for the people not just in Durant, but Bryan County and all of southern Oklahoma." "Our town has seen a new light and this just adds to the light of this community."

The new high school will take approximately 18 months to complete.   It will open in August 2011.

The current high school with become the new middle school. As for the old middle school, Simeroth says there are no set plans.