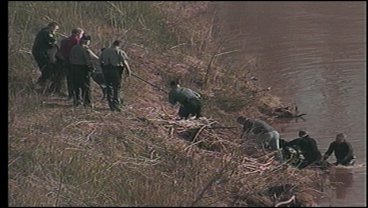 We told you first, on KTEN News at 5, two years ago an Ardmore man was found dead in the Washita River.   Wednesday, an arrest was finally made.  Meredith Saldana has been following this story, she has the latest.

The arrest was made Wednesday afternoon and Carter County District Attorney Craig Ladd says this is a case he's been working with the Carter County Sheriff's Department on for over 2 years.

According to Carter County Sheriff Ken Grace the man arrested, 27-year-old Chasse Stevens  has been a suspect for the last two years.

In fact, the victim Jimmy Fite and Stevens were acquaintances and the dispute that ended the life of Fite is believed to have been over a car.

The sheriff's department called it a suspicious death, and believed it to be a homicide, after people driving down State Highway 53 reported seeing a body in the Washita River.

The sheriff tells us 27-year-old Chasse Stevens of Ardmore was arrested at his house on Cherokee Street in Ardmore Wednesday and was booked into the Carter County Detention Center.

Fire arms were also found at his house.

Ladd tells us it was a series of things that made him believe there was enough to establish probable cause for a warrant for his arrest.

Stevens was arrested for 1st degree murder, he will appear in court Thursday for initials at 1:30.