DISD Teachers To Get Raise 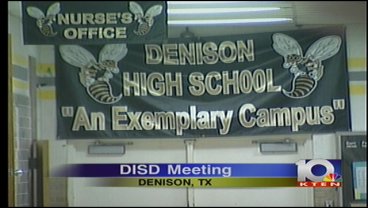 Denison ISD met Tuesday to iron out the district's budget for the upcoming school year.
Michelle Gillespie reports that for the most part there was a lot of good news.
For one thing, the tax rate homeowners pay will remain the same this year despite an increase in local property values. Dr. Henry Scott, DISD Superintendent, says the rate will be $1.27 and the reason it hasn't gone up is because as property values increase, the state funding to the district decreases a bit.
Basically, the school district's revenue comes from a mix of local property tax and state funding, something Dr. Scott calls a trade-off.
In terms of the budget for this upcoming school year, DISD has $200,000 in additional revenue--money Dr. Scott hopes to put into their reserves.
And more good news, out of Tuesday's meeting, possible raises for teachers in the district--most of them coming from state stimulus funds.

"Depending on where they are on the teacher salary schedule so they could get as much as $1,600 to $1,700 raise," says Dr. Scott.
The state of Texas received nearly $2 billion in stimulus money from the governemnt for education alone and Dr. Scott says those teacher raises are made up of a mix of mostly state stimulus money, about 70 percent to be exact, and the rest comes from the local district. There will be a public hearing and another Denison School district meeting on August 18th to discuss this proposed budget and tax rate.
Michelle Gillespie, KTEN News.