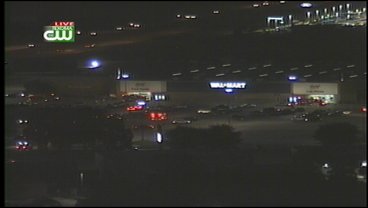 An unusual scene outside the Denison Wal-Mart Tuesday night, with emergency crews and flashing lights in the parking lot.

It was breaking news on Texoma's CW News at nine.

The Denison Fire Department responded to reports of smoke or a haze inside Wal-Mart. They did talk about evacuating shoppers, but in the end it turned out to be a problem with the air conditioning.

"We didn't feel necessary at this time," says Shift Captain Harley Davis, of the Denison Fire Dept. "There was no fire and no fire danger, and we let the building stay in service."

Officials isolated the haze to a roof unit, where they found gas -- believed to be freon -- spraying from a small rubber hose.

They've since fixed the problem and cleared the scene.