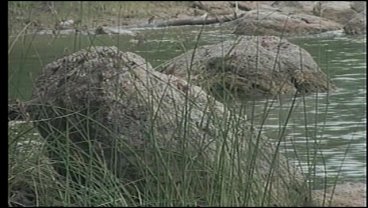 Here's something you don't hear about often, jellyfish in Lake Murray.  Turns out it's a true story and not just one of those fish tales.   Meredith Saldana met with the experts and has more on this story.

There are jelly fish at Lake Murray and park officials say they've been there for quite some time, since the '40's!

But this summer they've had quite a few reports of sightings.

Mark Teders the Lake Murray Park Naturalist says they're fresh water jellyfish, originally from Southeast Asia, but have been in North America for many years.

And while they are related to jellyfish that live in salt water, they're not quite as scary.

But they have been causing quite the stir from Lake Murray visitors.

Teders says, "You say jellyfish and you think of a man of war that's dangerous and if you touch it you'll die, they sting.   These jellyfish are totally harmless.  They do have tentacles and they do emit a toxin but it's totally harmless to people."

Teders says they're about the size of a nickel.

If you're wondering why they're at Lake Murray and haven't been reported at Texoma, Teders says they prefer clear waters where they feed on algae and insect larvae.