A Lake Murray Landmark Burns to The Ground 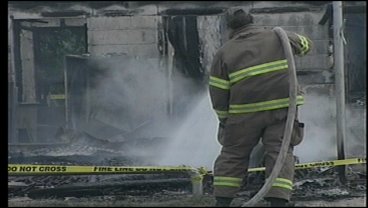 In Love County, Mom and Pop's a popular Lake Murray grocery store and restaurant, caught fire early Tuesday morning.  Meredith Saldana was on the scene she has more on the story.

Mom and Pop's is a total loss and the owners and employees say they were shocked Tuesday morning to see it completely engulfed.

Owner Roddy Childers says, "We got a call that said the store was on fire and we came up it was fully engulfed."

Employee Robin Crowe says, "Oh my god.  You know I got sick to my stomach had goose bumps.  When I got here I just sat down thinking what are we gonna do, you know?  My mind was like ok what can we do to start getting it cleaned up and rebuild again?"

Roddy Childers bought Mom and Pop's about 5 years ago and says the store has been around for over 50 years.

Regulars spent the morning stopping by in disbelief after hearing the store had burned down.

Crowe says, "Yeah I thought somebody was gonna run a golf cart off the road a while ago.  I mean you know just what happened and we don't even know that yet we're just waiting."

Robin Crowe has worked at the store for several years and says Monday afternoon she had to call in Childres to fix an electric cooler where drinks were stored in the kitchen because it kept turning off.

Crowe says, "I tried to reset breakers and stuff and he had come up here to fix it and I had come up here again to do some cleaning and it was off again.  So we're not real sure, but we're thinking it's electrical."

Since this store is located near Lake Murray this summer is peak business season for them.

Childers says, "Well yeah it's definitely going to hurt.  This is our busy time of the year and you know we'll just have to go from there you know just take it as it comes."

As for insurance Childers says unfortunately the store was not insured but they're not going to let that get them down.

"We'll have to just sit back and look at it and see what we can do you know get it cleaned up and I imagine we'll try to rebuild."

The state fire marshall's office was out on the scene early Tuesday morning and says the electrical situation does raise a red flag, but they are still investigating.