To Protect and To Serve Grayson County - KTEN.com - Texoma news, weather and sports

To Protect and To Serve Grayson County 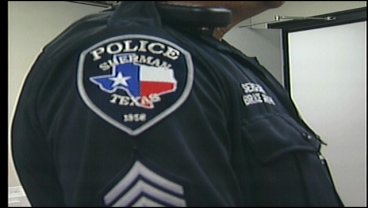 "To protect and to serve", that's the moto of law enforcement but when it comes to what could happen many officers say they can never be too prepared. Michelle Gillespie spoke with officials in Grayson County on Monday.
"The safety of our job depends on the general public and how they respond to us
and some don't respond well," says Sgt. Ricky Wheeler of the Grayson County Sheriff's Department, "the smallest of incidents can always turn into a major incident for us."
The Grayson County Sheriff's deputies conduct warrant round-ups at least once a week to arrest those with outstanding warrants for any thing from traffic ticket violations to attempted murder charges.
"It can be a traffic ticket that a police officer gets shot for or an attempted murder warrant there's really no discretion, it just depends on if the person wants to go to jail or not," says Sgt. Brice Smith of the Sherman Police Department.
And sometimes the serving of one warrant, can lead to several.
"Sometimes you may only find one person out of the 20, other times, at a house you may have three or four other people there, or a meth lab or people with drugs," says Wheeler.
All in a day's work for a police officer or sheriff's deputies. Sgt. Smith emphasizes you really can't understand the threat until you walk in their shoes, and now you can with what's called a "Ride-A-Long Program" with the Sherman Police Department. It's a program they put together to let those interested in law enforcement to see first hand, the daily dangers of protecting and serving.

"Come ride with the police for a night and see what it's actually like and experience it. A lot of times it will open people's minds to what we actually do because people think they know but never really know until you're sitting in a car and see what goes on," says Smith.

To take part in that ride-along program you have to be at least 18 years of age with no criminal history. For more information, call Sherman Police (903) 89207290.
Michelle Gillespie, KTEN News.