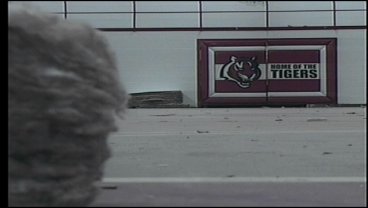 An update now on the Ardmore High School gym.  You may remember all the problems at the end of the school year.  With rain and the new roof being put in, the water ruined the gym floor.  Meredith Saldana has been following the story and has an update.

When the leaks first happened school officials told us they were hoping to have the gym fixed and the new floor in by the time school started, but, that won't be the case after all.

They tell us they want to make sure it's done right the first time even if it takes a little longer.

We told you the gym floor was going to cost over $100,000 to fix, insurance is covering all the damage costs, but the gym floor will be the last step in repairing the gym.

The walls have been repainted, new ceiling tiles have been put in and the electricity is also back on.

Chris Kennedy with Ardmore Schools says they're working closely with the contractors to make sure everything's done right.

Kennedy says, "Week by week we try to get with them, find out what's on the schedule, what's the plan so nobody gets ahead of somebody to where we have to come back and do it over again.   So we want to make sure it gets done right the first time."

As for a total on the amount of damage, the insurance company is still crunching numbers to come up with a total.

Tuesday, the tile floors will be put in and Kennedy says they are thankful they were able to save the two score boards that are worth about $30,000.