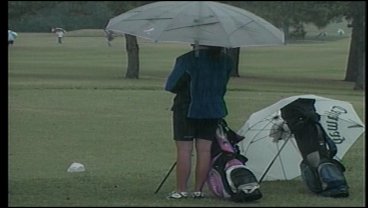 Folks in Ardmore may have noticed some extra traffic over the weekend as hundreds of teenage golfers and their families from across the nation have poured in for a nationwide tournament being held this week at Dornick Hills.  Meredith Saldana was there and has more on what this means for Ardmore.

Not only is it an honor for Ardmore to host this tournament for the second time, but it's also expected to bring in more than $1 million to our local economy.

Hundreds of spectators and golfers braved the rain, Monday, to watch the youngsters play.

The Trusted Choice Big "I" National Championship is known nationwide.

Even Tiger Woods won the tournament twice as a teen.

The tournament is traditionally held in larger towns like Augusta, Georgia.

Making Ardmore even more appreciative to be able to host the elite amateur tournament this week.

But it's also good news for the local economy.

T.J. Riley Committee Chairman says, "The impact on the economy is over a million dollars.  We know we've got over 400 hotel rooms we're using for this. That means they're eating in our restaurants, using our facilities and it's a chance for us to show what Ardmore's all about."

It is free for the public to attend the tournament that lasts through Thursday.