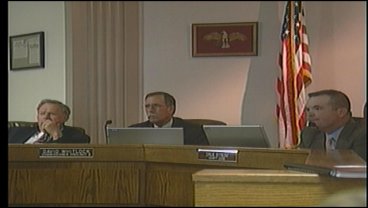 Despite growing opposition from the public Grayson Co. Commissioners are moving ahead with the private jail. They voted 3 to 1 Monday to purchase 93 acres of land to build a new facility. KTEN's Katy Blakey has more.

The lone vote of dissent came from Commissioner Gene Short. Commissioner Jackie Crisp was absent from the meeting. Short shared many other people's concerns in wondering why the county is buying land when a contract with Southwest Correctional has not been signed.

It was standing room only in Commissioners' Court, filled with law enforcement, Sherman city leaders and residents who oppose the private jail going in their backyard. Among those voicing their opposition, a familiar face to the court - former County Commissioner Carol Shea.

"It makes me angry when elected leaders slide something by the public and we don't want a private jail," said Shea.

"The majority of [the people] in the courtroom would prefer they slow it down and look at privatization," said Sheriff Keith Gary.

But commissioners are not slowing down. County Judge Drue Bynum insists they have passed the point of debate on public versus private. After Monday's vote the County can start negotiations with the owner of this property off Graystone Drive. Right now the asking price is $10,000 an acre. The county isn't solely responsible for fronting that cost. It will be worked into the package with Southwest Correctional.

"I thought it was premature when we haven't signed a contract yet."

Sheriff Keith Gary is preparing for what's to come, despite his reservations. He's hired attorney Clyde Seibman to help him review the contract with Southwest Correctional before he gives his final approval to the Commissioners' Court.

"I want to be sure we're getting this thing right."

County Judge Drue Bynum told the court he had no reservations about moving ahead with the purchase, despite having nothing in writhing with Southwest. He added a contract may be presented sometime in the next two to three weeks.