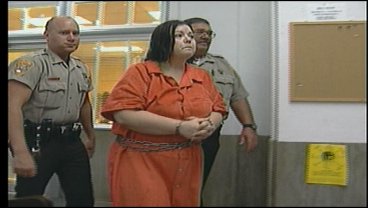 Abel and Denise Wolf are back in Oklahoma. They landed around three o'clock Sunday morning at Eaker Field in Durant. They two were extradited back from Montana on charges of digging up the remains of Abel's 11-year-old daughter then moving her remains from Oklahoma to Montana and then to Oregon. Both, 35-year-old Abel Wolf, and 40-year-old Denise Wolf face charges of unlawful removal of a dead body.

The two arrived at the Bryan County Courtroom around two o'clock where they were read their formal charges and entered a plea of not guilty. They each face felony charges for unlawful removal of a dead body that carries up to a five year prison sentence.

Right now, the body in question has yet to be formally identified and a cause of death determined, so a lot of questions remain. "I know that the situation is hard for people to understand, exactly what happened. We don't know yet either." the Bryan County D.A. says their is a possibility of more charges to come for the Wolf couple once a cause of death is ruled.

As for the body, believed to be the daughter, Cheyenne Wolf, it will also return to Oklahoma. It's currently at the medical examiner's office in Oregon where it was sent after authorities discovered it in a storage shed July fourth. A spokesperson for OSBI says authorities there are still conducting their forensic autopsy.  A cause of death could still take several more weeks.

Abel and Denise Wolf will re-appear in court in a couple weeks for a preliminary hearing conference to determine whether the case will go to trial.