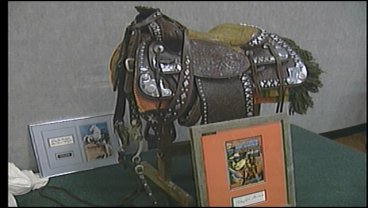 It's an American treasure uncovered right here in Texoma - a saddle belonging to the Lone Ranger - used during the popular 1950s TV show.

It was unveiled Saturday night for a crowd in Denison. This is only the second time it has been seen by the public. The saddle belongs to a local businessman who bought the saddle from a Whitesboro man. That Whitesboro saddle broker bought it from the Lone Ranger himself, Clayton Moore, in 1964 for $400.

That broker then sold it to the local businessman for $500. No word on what this saddle could be worth today.

Doug Coleman of Box Seat Sports says a cape worn by Superman during the 1950s show recently auctioned off for $178,000.

The saddle broker originally bought the saddle for his 16-year-old daughter. Coleman told KTEN she only used the saddle five times, before giving up and putting it in the corner. She was 5 feet tall and it was custom made for Moore who was 6'2".