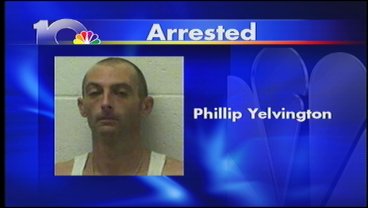 In Bryan County, an arrest in a Durant stabbing that happened two-and-a-half weeks ago. The surprising twist? The suspect lived next door.

New on KTEN News at 10: More on 33-year-old Phillip Austin Yelvington's criminal history. He's now facing first-degree murder charges. But, this isn't the first time he's been in trouble with the law.

He has drug charges going back to 2006. In fact, when he was taken into custody Thursday night, he was serving a five-year suspended sentence for possession of a controlled substance that wasn't up until 2012. Today, prosecutors filed a motion to revoke what was basically "parole."

Authorities believe he was involved in the stabbing death of 25-year-old Jason Booker, killed in early July. But, his mother believes he's innocent.

"He didn't do it," says Rhonda Yelvington, the suspect's mother. "He's innocent. Phillip did not kill that man, he wouldn't do that. He has a daughter, he's a father, he's a good son."

She claims her son was at home with her. In fact, she says they were both asleep in the same bed at the time of the killing. And she says, her son didn't even know the victim, or his family,  who had just moved in a couple of weeks before.

We also spoke with neighbors today about the arrest.

"It's kind of a sad deal for a family," says Bryce Jenkins, a neighbor. "They wake up one morning and the husband's dead, dad's gone, son, brother, it's a bad deal."

Police brought Yelvington in for questioning Thursday night. After learning the ball cap found at the scene belonged to him, although his mother says it isn't his. And, according to authorities, they gathered enough evidence from the interview to file charges. But, they are still investigating.

We should know more on the evidence against Yelvington on Monday.