Durant Man Arrested for Stabbing Another Man, Mother Speaks Out 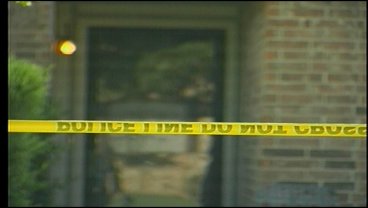 Phillip Austin Yelvington is now in the Bryan County jail charged with first degree murder.
Authorities arrested him last night , in connection with the stabbing death of 25 year-old Jason Booker, who they now say, was stabbed to death in his own bed, in his own home, in the middle of the night on July 8th.  Michelle gillespie spoke with Yelvington's mother, Rhonda Yelvington, who says her son didn't do it.
In fact, she says, he was sleeping at her home that she shares with her sister, right next door to the victims.
In fact, she said, he was in the same bed she was in, so she knows he was really there!
Durant police say they brought Yelvington in for questioning last night and from that interview, they say, they had enough to arrest him and charge him with first degree murder.
"He didn't do it, he's not like that," Rhonda says. Police say the ball cap found at the scene belongs to Yelvington but his mother says it doesn't. She does admit her son has a criminal history but says he didn't even know the victim and had never met him or his family.