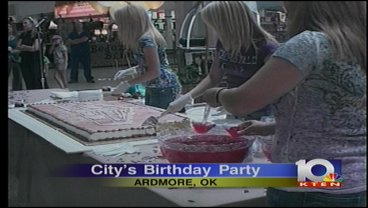 A big birthday celebration in Ardmore.  The city celebrated it's 122nd birthday.  Some residents who have lived in Ardmore for quite some time say it's exciting to see how much Ardmore has changed throughout the years.  Meredith Saldana reports.

The city of Ardmore was founded before statehood, in 1887, while Oklahoma was still Indian territory.

It wasn't long after oil was discovered and Ardmore quickly became one of the fastest growing cities in the southwest.

While the city has changed throughout the years, residents like Burt Gibbs say it's also managed to keep it's southern charm that first attracted he and his family.

The city's 122nd birthday party was held at the Mountain View Mall.

It featured a craft show and cake and punch was served for guests.

Gibbs says his birthday wish for Ardmore was that it will still be thriving another 122 years.