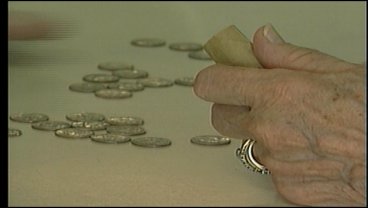 The minimum wage increased on Friday. It now stands at $7.25 per hour. After a 40 hour work week that could equal $28 in extra pay. It's not much, but in a recession it helps. Katy Blakey has more.

For many workers it is good news, but small businesses say during a recession this jump in wages could force hours being cut or worse, lay-offs.

"If you're like me, you live paycheck to paycheck," said Evelyn Stone. "And it's rough out there."

America's lowest wage earners are getting a boost. A 70 cent jump in the minimum wage, raising in to $7.25 an hour. It's extra money in the pockets of shoppers and employees at Sherman's Goodwill store.

"I think it was time because you can just not live in these days and times and make small money," said Joann Wells, a clerk at Sherman's Goodwill. "There is no balance."

"I don't care how many jobs you have, it's just hard," said Stone. "Gas is going up. Food is going up. Taxes are going up."

Opponents of the wage hike, including many small businesses, say the increase costs them too much money and will ultimately lead to lay-offs or reduced hours. Something Goodwill Industries is trying to avoid.

"I think this one is going to hurt. A lot of small businesses, especially, this time," said Ron Harris, CFO for the Northeastern Texas division of Goodwill Industries.

The wage hike has costs the company's Northeast Texas division $190,000. They complied with the new minimum wage, then increased wages for the remaining employees.

"Over the last 3 years everybody at some time has gotten a raise."

Extra money that proponents of the plan hope will spur spending.

"The grocery store gets all of my money," said Wells. "Anytime there is a wage increase everything else goes up."

So will the minimum wage increase help or hurt? Like much of the nation's financial worries, the answer is unknown.

"You wake up and you don't know if you're going to have a job or not have a job," said Stone. "A lot of people feel like I do. We don't know what to look forward to."