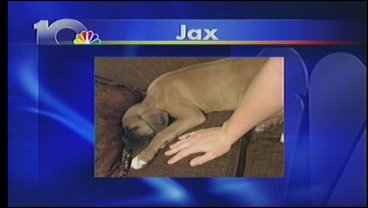 In Pontotoc County, a sad story, 2 young boys are missing their dog.  The family believes he was stolen.  The family's 4-year-old, Colton, was born blind and Jax his Boxer was his special companion.   KTEN's Meredith Saldana has their story.

They're asking for the public's help bringing their 16 week old Boxer puppy home.

The family lives in Roff and says last week they noticed their boxer, Jax, was nowhere to be found.

The boy's Grandmother Ellen Vandever says, "Colton is visually impaired, as I said, and you know he can't see but he knew that his dog was gone and he stood, he stood on the back porch and wanted his dog.  So, it's been real, real sad for them."

Jessica Pennington, Colton's mother, says, "I thought he was just playing around the corner or he was, you know, just wandered off like a puppy but we drove countless hours around Roff and he's nowhere."

The family says because Colton is blind he was cautious around the puppy at first but quickly grew to love him.

In fact, his family says it  breaks their heart to hear him call for Jax telling him he needs him.

But the family says they don't believe Jax wandered off.

They say several pure bred dogs from their area have just vanished.

Vandever says, "There in the last few months there's been a jack Russell Terrier, a Black Lab, our Boxer and then further out of town there was a Pit Bull pup came up missing at the same time as Jax."

Chief of Police Glen Bohanon says they've also noticed the trend and they believe one group is responsible for the missing dogs.

And say they have reason to believe the dogs were taken because they could all draw in hundreds of dollars if they were bred.

The family says the kids are so devastated by the loss they just want Jax home safe.

Whether charges are filed or not.