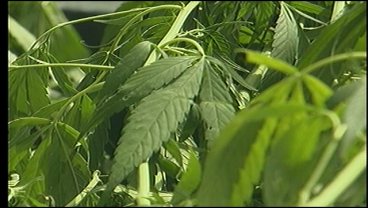 Police have made two big marijuana busts in Sherman in just two days.
The most recent involved huge plants growing in the southwest side of the city.
Michelle Gillespie was on the scene Wednesday afternoon while authorities actually dug up some of those plants, 25 in total, standing at least five feet tall or more.
The isolated area, just off of Holly Street in southwest Sherman, backs up to the Stone Creek Golf Course.
Police said they got a call Wednesday afternoon from a man who works in the area, saying he discovered them while walking in the field.

"It's not impossible--anywhere that you have a heavily forested area for something like this to occur. It is unusual for Sherman, it's not very often we find a field that's got marijuana growing in it," says Sgt. Bruce Dawsey, of Sherman Police.
Sgt. Dawsey says it's clear whoever was growing the plants was taking good care of them.
They were growing in small groups and he says the shrubs and area around the marijuana plants had been trimmed back to allow sunlight to get to them. As for now, narcotics officers will continue to search the dozens of acres, as well as begin an investigation to find the growers.
If you have any information you're asked to call Sherman police at 903-892-7290.
Michelle Gillespie, KTEN News.