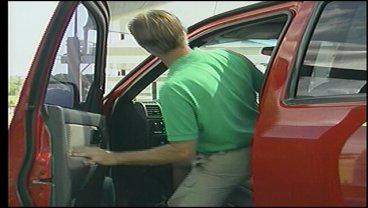 Ready to get rid of that old clunker and listen to the roar of a new engine? now may be the best time to do that.

Sam Money says, "I have an older vehicle, a Tahoe, and I've been thinking about that."

The government is teaming up with dealerships to give you cash back for your old trade in. Blake Utter, with Blake Utter Ford says, "Either $3,500 or $4,500 to help them buy a new vehicle."

That's right, up to $4,500 depending on the type of vehicle you purchase and the one your trading in. The incentive doesn't roll out until this Friday, but it's already creating buzz at local dealers.

Luke Bonner, with Team Bonner says, "People know about it, people are already asking about it."

Utter says, "They're ready to buy cars and get rid of their "clunker vehicles" and get the government rebate."

According to the program's website, your trade in must be less than 25 years old, have a new combined city/highway fuel economy of 18 miles per gallon or less, be drivable, be continuously insured and registered to the same owner for the past year.

Heavy duty trucks, like the f-350, also qualify. They just have to be a 2001 model or newer. The program is only good towards new vehicles, either bought or leased, and includes foreign and domestic makes.

Utter says, "The flow of money is just the most important thing right now."

The program officially kicks off July 24th and will last until $1,000,000,000 in rebate credits are reported or November first, whichever comes first.