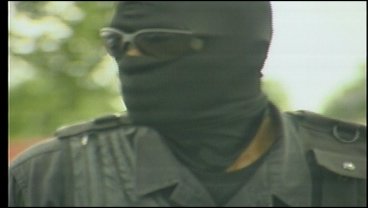 In Paris, Texas, police swarmed the streets this afternoon, breaking up a tense standoff between screaming black separatists and white supremacists.

Approximately 100 people protested the state's handling the case of a black dragging death of 24-year-old Brandon McClelland.  The black panthers were met by about about a dozen white supremacist protesters, and two people were reportedly arrested by the Lamar County Sheriff's Office.

But beyond the protests is a family looking for answers.  They say they're looking beyond racism to find out exactly how their loved one died.   As cries of racism were shouted from both sides of the street, the family who lost a love one stood quite.  They say they were not interested in race, but instead hoping to bring light to this unsolved case on whoever killed Brandon.  Lavon and Jane McCleary, Brandon's Aunts say, "It's not a racial thing.  We just want to know who did this, we want the truth."  Looking beyond black and white, they're searching for the truth.  "We just want him to come forward and say sorry it was an accident," Lavon McCleary says of who is responsible for running over their nephew.  "We have no answers to what happened, we just want answers," says Jane McCleary.

It's a case that's divided a community and now brought in groups like the new black panthers and white supremacists.  And over the division, the divided Paris streets the grieving family found no peace. "We just aint gonna rest", Lavon McCleary says.