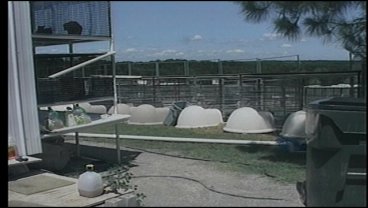 We received calls and emails from KTEN viewers about the condition of animals for sale in Carter County.  They claim, the dogs they bought were sick and questioned conditions of a breeding facility in Dickson.  Meredith Saldana looked into it for us.

Families told us the puppies were costing them  hundreds of dollars in doctors bills, or even worse, the heartache of the death of their new pet.

12-year-old Blade Gray says, "I don't think it's right that he gives us a puppy that's sick and that's halfway dead."

The Gray family bought their dog from Pine Hill Kennel in Dickson on Friday afternoon.

Saturday morning the family said the dog was vomiting blood and having seizures.

Derek Taylor says, "It couldn't even hold it's head up at all.  It couldn't move at all Saturday."

The breeder, Jerry Garrett, asked to not be interviewed on camera but he did allow us onto his property.

He says his dogs are all healthy.

But the Gray family says  their veterinarian diagnosed the puppy Saturday with parvo.

But Garrett says he doesn't believe them.

Jerry Garrett says, "For that puppy to die that fast something had to happen.  It was not from overnight parvo, that does not happen."

Now the family wants their money back.

But Garrett says they signed a contract saying the money was non-refundable.

He even showed us copies of the contracts he uses when he sells the dogs.

She says this isn't the first complaint against  the Pine Hill Puppy Kennel.

Garrett says he does offer a new dog from his kennel if something happens the first animal purchased.

Cain says, "He says he'll give you another one, you're gonna go through the same thing again.  He's got parvo on the premises.  You can't get rid of it that easily."

As for the Gray's, they said after all they've been through, they're not ready to buy a new puppy just yet.

It's gonna take them some time.

We also checked with other officials to see who regulates local breeders.

Local law enforcement says while they, too, have received numerous calls they can't take any legal action unless legislation is passed.

Anyone with concerns is asked to express them to your local legislators.