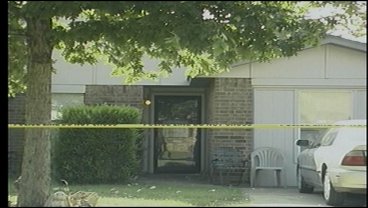 Neighbors say after that night the victims wife and child packed up their belongings and left, but they don't plan on going anywhere.

Neighbor Brice Jenkins says, "I'm really not worried about the neighborhood, haven't had anything happen since then."

On the morning of July 8th, the quiet neighborhood in Northwest Durant was unrecognizable. Police cruisers and crime scene tape flooded Lynwood Drive. Hours earlier 25 year old Jason Booker was stabbed to death while he lay in bed.

So far police have not made any arrests. Detective Randall Cheney, "Anything that comes in, were following up on. At this point, we don't have any solid suspects."

Brice Jenkins lives across the street from the crime scene. Jenkins says, "It's kind of a fluke thing. You wake up one morning to find out there's a stabbing across the street, makes you little nervous."

Others in the area have changed their habits. James Wingo go says, "I go around, double check, make sure the doors are locked up. I get up every time the dog barks even if it's the neighbors dogs, I get up and see what's going on."

Police believe Jason Booker was targeted that night, but say residents should always lock up.

"Just general practices of keeping safe at night. Locking doors and windows would probably be a good idea."

Investigators have released a photo of a baseball cap found at the crime scene. They say it could identify the assailant. As for other leads, Detective Cheney says, "We're going to rite down every lead we get."

Durant Police are working with OSBI to catch the person who killed Jason Booker at his home. They believe it was one person acting alone, but don't know if the suspect is still in town.