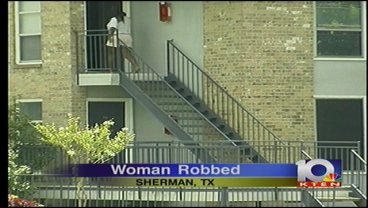 Police say the two robberies are unrelated, and unusual, but they do have one thing in common, both may have been prevented if the victims paid better attention to what was going on around them.

One of the robberies happened at the Park View Apartments on Taylor Street in Sherman at about 10:30 Monday night.

According to reports,  a 42-year-old woman was walking up the stairs to her apartment, carrying her one-year-old grandson in one arm and a purse in the other, when a man pushed her down, and another grabbed her purse. All the victim was able to see was three black men running away.

Sgt. Bruce Dawsey says, "It's a random event. It's not crime a ridden area. Robberies are not common in the city, but they do occur."

Closer to downtown Sherman, a 46-year-old man was hit with branches and a wooden plank at an alleyway along the 800 block of East Lamar. It happened at about 9:30 Monday night.

Police say the men took off with the victim's wallet and a pack of cigarettes.

In this case the three men are described as Hispanic, in their late teens or early twenties, one wearing a blue ball cap and jeans.