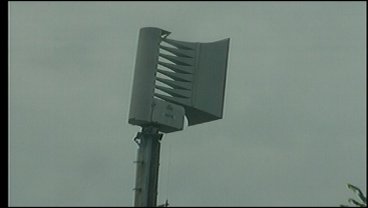 It's been nearly eight months since a tornado ripped down Crestview Drive. Neighbors say, some moved out after that night, others are still rebuilding.

Bertha Coffin says, "It was a traumatic experience I hope and pray to never have to go through again. The day of the storms, in December, we didn't even know that tornadoes were around."

Now, nearly eight months and $35,000 later, five out of the six  do work. The one behind the central fire station took another hit by mother nature, just two weeks after it was installed, it went out again.

Chief Gordon Weger says, "There was a storm and it was struck by lightning."

That was about a month ago. Now, council members will decide whether to repair or replace it. The cost runs between $9,000 and $21,000.

Chief Weger says, "I just want a siren up that would work."

Meanwhile, Grayson County commissioners approved spending about $40,000 of grant money on a warning system that would include everyone who lives in the county. It would be like Denison's telephone delivered warning system.

Chief Weger says, "I think we have 3 or 4 cities within the county that have the Code Red. This would just combine the entire county incorporated and unincorporated."

"I've been worried about our ability to issue warning since I took this job in October."

Mrs. Coffin says, "We need something that is going to notify people to take cover."

They're aren't many details on the weather alert system. The next step is speaking to each of the 16 cities in Grayson County to make sure they want to be part of the system. And just like our weather call, it would call you and advise you of severe weather.