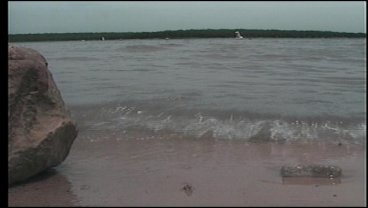 A second drowning this month at Lake Murray's Marina Beach.  This time, a young man in his 20's.  It happened Sunday.  Meredith Saldana toured the beach with OHP she has more on this story.

According to OHP the young man went under just after 2 and he hadn't eaten anything since 8 pm the night before.

Which they believe was part of the problem.

Trooper Marty Grisham says 24-year-old Rigoberto Vanegas-Chaves was playing catch with friends when the ball got away from him.

The wind blew it into deeper water, he went after it and that's when he started calling for help.

But he was about 30 feet from shore, in water about 8-feet deep.

Grisham says it was a combination of problems that led to the drowning.

Vanegas-Chavez wasn't a good swimmer and he hadn't eaten since the day before.

Witnesses said while he wasn't drinking alcohol, all he'd had to drink all day was an energy drink.

Trooper Grisham says, "Energy drinks you know they may, for a short period of time, make you feel energized.   But in the long run you'll crash at the end of it and you'll feel even more tired than you were when you started drinking the energy drink."

Grisham says if you're not a strong swimmer it's important to wear a life vest.

One lake-goer told me she thinks life vests should be required and believes it will help save lives.