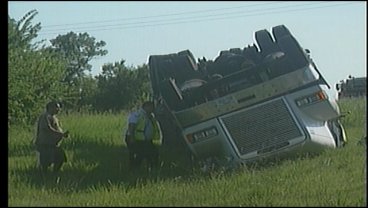 Whitesboro crews worked late into the night Sunday - cleaning up after a semi overturned on Highway 82.

It happened around 10:30 Sunday night in front of the Whitesboro High School. Troopers are still investigating what happened, but when crews arrived the semi was overturned and the driver was trapped inside. Crews eventually freed the man. He was flown by Lifestar to Parkland Hospital in Dallas. His injuries are unknown at this time.

The highway was shut down for over an hour while crews worked to clear the scene. The 18-wheeler was reportedly carrying part of an abandoned house, and the debris scattered across the area.

Crews in Calera, OK were also busy after a semi overturned Sunday afternoon.

It happened on the shoulder of Highway 69/75. Officials at the scene told KTEN the driver of the semi pulled on to the shoulder for a maintenance check. When he went to leave, the trailer load was off-balance and caused the semi to turn onto it's side. The driver was not injured, but traffic was down to one lane through that area for about two hours.