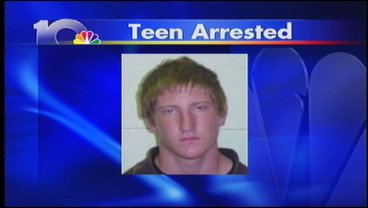 There is new information about that bizarre semi pursuit and crash through southeastern Oklahoma Saturday.

Authorities say the driver of that stolen semi is finally cooperating with local officials. His name is not being released because he is 17 years old.

Troopers told KTEN the teenager escaped from a juvenile detention center in Georgia on July 6 and was considered armed and dangerous for escape, auto theft and assault.  Authorities say he stole cars throughout the southern part of the U.S. while making his way to Oklahoma, joined the circus for a short time before winding up in Muskogee and reportedly stealing a semi-truck.

The teen crashed the truck into two downtown businesses Saturday morning in Tishomingo, after leading authorities on a 61 mile pursuit from Coalgate to Pontotoc County and ultimately to Johnston County - narrowly missing drivers and pedestrians.

No one was harmed in the incident, but witnesses say the semi was speeding up to 100 miles per hour during parts of the pursuit.

The teen remains at the Johnston County jail until he can be transported to an Oklahoma juvenile center before being sent back to Georgia.

Troopers are still encouraging drivers who may have been run-off the road during the pursuit to contact them and report the crime at 580-223-8800.