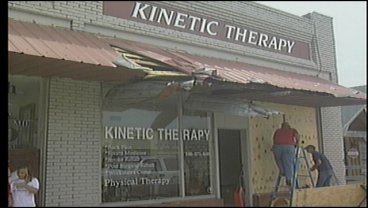 A man steals a semi-truck in Muskogee, then leads troopers on a high-speed chase before crashing in Tishomingo. At one point, witnesses say the 18-wheeler was cruising at speeds of 100 miles per hour, twisting through the narrow roads of Coal and Johnston County. Our KTEN crews spent the day in Johnston County talk to the people who saw it first hand.

Ceigel Heffington walked away with a few bumps and bruises, but quite a story to tell.

"It was surreal," said Heffington. "It happened so fast. I was really lucky."

Heffington was standing in downtown Tishomingo when a tractor trailer came roaring towards him, taking a corner too fast. He took off running, injuring himself, in a race to avoid the inevitable crash.

The truck slammed into two downtown businesses. Oklahoma troopers were close behind.

"They fired three shots. It scared me a lot. It was crazy,"said Christy Adams, who witnessed the scene. "I've never seen anything like it."

One trooper fired a round, blowing out a tire. Authorities pulled out the driver and placed him under arrest. He's now being held at the Johnston County courthouse. He's believed to have stolen the semi in Muskogee before leading police on a 61 mile pursuit from Coalgate, north to Pontotoc County, then back south to Tishomingo.

"It's stressful," said Trooper John Ivy. "You have lots of things to think about. What's ahead of you and what's going through their mind."

Within hours of the crash Tishomingo residents were already lending a hand helping the damaged businesses clean up.

"I was just thankful no one was hurt," said Clarie Dennis. "It happened on a weekend when we had no patients."

Authorities say the driver has been unwilling to cooperate, but is facing DUI charges as well as theft and pursuit charges. They are asking for the public's help to identify him. They also say if you were affected by the pursuit or run-off the road because of the driver's actions you should call their office at 580-223-8800.