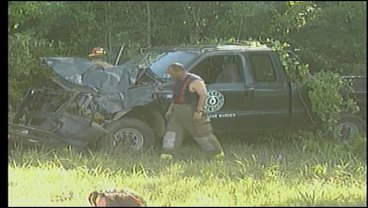 A Texas Game Warden was injured in a rollover crash Saturday.

The accident happened around 5 o'clock on FM 901, near Big Mineral Road in Sadler.  Paramedics rushed the driver, Jim Ballard, to Texoma Medical Center as a precaution. Co-workers tell KTEN Ballard was released Saturday night and is doing okay. He only suffered a few minor bumps and bruises. Fellow game wardens say they can't believe Ballard walked away from the crash without serious injuries.

DPS Troopers say the game warden was trying to avoid one wreck when this one happened.

"He came around this corner," said DPS Trooper Jim Fortenberry. "There was a vehicle in his lane. He swerved and then went off into the ditch."

No one else was injured. The game warden's name is not being released at this time.