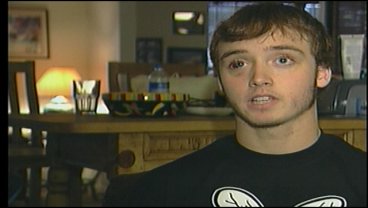 It has been a dangerous summer for teen drivers. A fiery crash Thursday injured six Denison teenagers and nearly two weeks ago, two other teens were seriously injured: Alex Elk and Trevor Raney. The two returned from the hospital this week and shared their survival story with KTEN.

"I have two broken femurs and a dislocated and broken ankle," said Alex Elk. "And I can't walk on this ankle for three months."

"I had a broken right femur. It broke really high," said Trevor Raney. "They had to put a titanium rod in mine, as well. And I have a broken arm and a broken left big toe."

Despite the scars and the pain, the Denison High Juniors are moving on with their summer vacation. The childhood friends were seriously injured on Fannin Road two weeks ago.

"I can't remember any of it. Just came up over the hill and it's all a blank," said Elk.

Troopers say the teens were speeding when they cruised over a hill, went airborne and slammed their car into a grove of trees. Alex was behind the wheel. He just got his license two months ago.

"I would have never thought I would live through that. I saw the car and I'm surprised I'm here," said Elk. "I didn't speed all the time, just on that back road because I knew it so well. But apparently I didn't know it well enough."

The two teens say they learned a valuable lesson on that country road.

"Be careful," said Raney. "Don't worry about getting places on time if you have to speed to get there."

They're hoping others can learn from their mistake, but, they say they are conscious of how hard-headed new drivers can be.

"To be honest, I don't think kids really listen the way we should."

Still the two boys and their families hope their experience will stick with their classmates.

"Friends definitely will slow down and realize, because they came close to losing two of their friends."

Both families say they are extremely grateful to Denison's first responders and the doctors and nurses who took care of their sons and want to publicly thank those who rushed to their sons' sides, including Mark Escamillia, Cory Graham, Steve Franks, Landon Lindsey, Keith Bates, James Cobb, Brandon Eeds, Micah Floyd, Luis Lopez and Jerry Burgess. The families say more people may have helped and they want to express their gratitude to all of Denison's first responders.