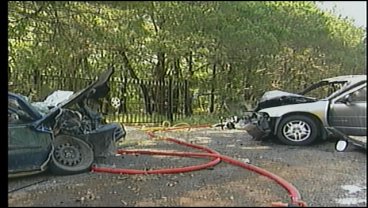 Three teenagers and a nine year old girl are among six people injured in Denison, Thursday.
A head on collision that turned into a fiery race to save lives. Michelle Gillespie reports that this is the second accident in just two weeks involving teenagers from Denison.
And in this case, just like the other, two helicopters helped transport those victims to Dallas hospitals.
17-year old Matthew Wood was in critical condition at Baylor in Dallas, Thursday night.
He was the passenger in a Toyota driven by his cousin, Rex Morgan, who was taken to TMC with serious injuries to his right leg.
Wood's sixteen year old girlfriend whose name has not been released was in serious condition at Parkland in Dallas.
Wood's nine year old sister is listed as stable.
Also, the driver of the Dodge Stratus -- that caught fire, Brittani Barnett is 19 years old.
She and her 15 year old cousin were treated and released from TMC, but for about an hour this evening -- emergency crews didn't know what to expect.

It happened on a blind hill with no speed limit signs on a narrow country road.

"One of the vehicles was fully engulfed in flames when we got here..luckily the occupants were out," says Captain Harley Davis from the Denison Fire Department.

Out, but some, seriously injured.

"There are several accidents on this road," said Capt. Davis.

Thursday's accident -- a head on collision.
By the time crews got to the scene, the Dodge Stratus had burst into flames.
The good news was that everyone made it out safe.
But neighbors say, they're afraid it could happen again.

"We're afraid to pull out on this road with a trailer or anything because of traffic. You just don't know if someone is going to hit you," says a neighbor.
Troopers say both vehicles hit head on when they were driving over the blind hill--a place where neighbors say speed is always a factor, making Richerson Road even more dangerous.

"We've compained before but that's what county commissioners say---60 miles per hour if its not posted," says a Richerson Road resident.
And where these two vehicles crashed on Thursday, it's not posted on the street.
DPS officials say from the skid marks left on the road, they know that the two cars were both in the middle of the road which could explain the fire, but as for speed, they say it was a factor but they're still investigating.