The Importance of Rabies Vaccinations 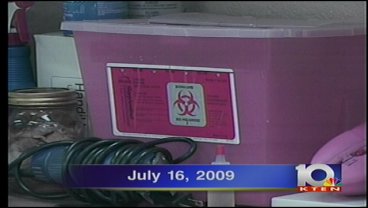 A family in Carter County had to make a decision that just tears at your heart.  After not knowing whether their 11 pets had been exposed to a rabid animal, they decided to put all 11 pets down.  Now their veterinarian is hoping this is lesson other pet owners can learn from.  Meredith Saldana has more on this story.

The pets weren't caught up with their rabies shots and the family is hoping that other pet  owners can learn from their mistake, rather than first hand.

The rabid animal that may have been in contact with the families pets was a skunk that had been hanging around the families home.

Which local vet Cade Wilson says isn't unheard of in the rural areas of town.

But Dr. Wilson says the pets were inside/outside pets which caused some concern.

"One of the problems with the incident we just had was that we were unsure whether the pets were in contact with the rabid animal or not.  And the problem was that these same pets had contact with small children on a daily basis," says Dr. Wilson.

The family only had 2 choices, euthanasia or quarantine.

Meaning they would have to pay to bored all 11 pets for 6 months.

So, the difficult decision was made to put the pets down.