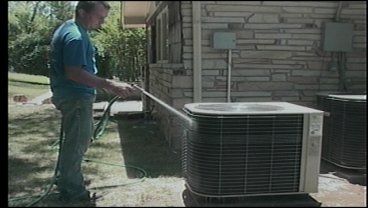 The record high temperatures seem to be affecting everyone.  Especially local air conditioning service companies who are working overtime to fix your air conditioners and keep you cool during these triple digit temperatures.  Meredith Saldana met with a local company on how their business has been affected.

One local company says high temperatures are proving to be too much for some AC units.

They've even had to hire extra help to keep up with demand.

It's a job that seems to be recession proof.

Todd's Lake Country Heat and Air says they've been inundated with calls from people whose AC units have quit working because of the heat.

And they've noticed a trend this year, less people are wanting to replace their units because times are tough.

Todd Collett, owner of Todd's Lake Country Heat and Air says, "We're seeing more people that are saying hey can we fix this?"

He says customers aren't wanting to spend the money to purchase new units all together.

Collett says his guys are averaging about 55-60 hours a week just to keep up with the demand and they expect to continue to be busy as long as the extreme temperatures continue.