County Raises In Atoka Cause Concern 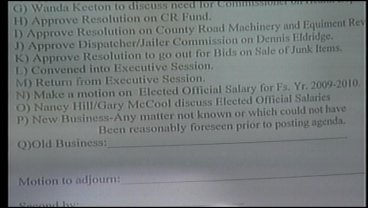 In Atoka, county officials recently approved raises, amounting to $48,000. Officials voted on their own raises, a $6,000 a year increase for each member.

Since Monday night's meeting, when it all happened, KTEN has received quite a few concerned calls from viewers. We went out there, and spoke with Tax Assessor Nancy Hill, who's opposed to the idea and the only one of eight to vote against it.

"I voted the way I felt they would feel -- I felt they would be upset if the raise was given because, like I said, people are losing their jobs," says Hill. "The economy's bad. Now's not the time to be giving yourself a raise."

KTEN tried getting comment from the sheriff -- one of the elected officials who'll be getting the raise, but he just showed us the door. So, we stuck to the sidewalk to hear what residents had to say.

'I think it's kind of cheap that they're spending dollars on themselves," says Chet Latham, an Atoka County resident. "We could have gone and got $48,000 on our school systems."

Adds Carla Eldridge, another Atoka County resident: "I don't think it's right with the way the economy and people losing their jobs the give themselves raises that they could've put the money to better use."

"Well, if they're giving themselves raises and stuff like that," says Johnny Walton. "I don't think that's right by no means. I mean, if they're going to give themselves a raise, why don't they give everybody else a raise. It just ain't right."

Another interesting note: So far this year, the county has mailed 8,000 notices of a tax increase for area residents.