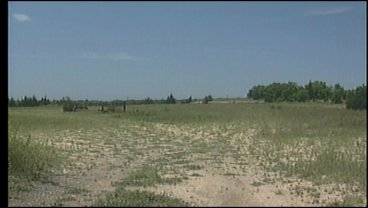 From day one, when commissioners first started talking about using the land across the street for a new jail, neighbors said not in our backyard.  Now, after hearing the final vote, they're making sure their voices are heard. Deeda Payton reports.

This neighborhood, Cedar Park Village, is directly across the street from where the new jail will be. A quiet neighborhood now, that in a year and a half will be in earshot and eyesight of this new facility housing some four hundred inmates.

It's the american dream, own a home in a nice neighborhood where you know your children will be safe. Developers opened Cedar Park Village just about three years ago. When these families moved in, they had no idea their peacefull community would end up just feet away from criminals. "I probably wouldn't have moved here." "We'd probably be looking elsewhere."

Their reasons for not wanting to be neighbors with a county jail that will house 400 inmates...."Safety, because of the access of the property they'll have to come very close to us when transporting." "If they move the jail out here, Gee!, what'll it do to our prop value but the main thing is what it'll do to security out here." "We've had people express the concern that they couldn't let their children out to play, couldn't let them walk to school, couldn't let them wait on the bus so there's just concerns about safety, value of property and being close to the jail."

And, now that commissioners have decided to privatize, residents want to know who will be held accountable if something goes wrong. Even Former County Commissioner, Carol Shea, is sounding off. "If it goes private, which i am totally opposed to, totally, then what do you do if you have problem call corporate?"

All of these concerns were voiced at Monday's meeting, but residents of Cedar Park say commissioner's didn't seem to hear them. "I think that we were well represented we asked a lot of valid questions. I don't think we recieved any valid answers." "I realize that they represent 125,000 people but what about our neighborhood, what about us? It will change the very essence of this neighborhood."

And, many don't understand why they weren't allowed to vote on the issue. "I really would have liked for the Grayson County Commissioners to allow residents to vote on this issue.

As for Southwest Correctional, the company who will build the new jail, they plan to have a meeting and address the communities concerns. But, that won't happen until they actually start the planning process with the architect.