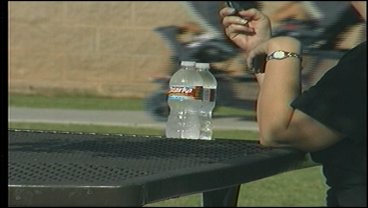 Everyone has been talking about the heat and if you have stepped outside, then you know the heat can be unbearable.  But it's what you do before you step outside that matters most.  That's why many are making sure to drink lots of fluids and eat the right foods before spending the day outdoors.  And with a heat advisory in effect for the past two days getting dehydrated is easy, but the good news is many residents realize the dangers.

The temperatures have been topping 100 degrees for over a week now so it's no wonder dehydration is a top concern.  In the summer months, it's even more important to drink fluids before heading out the door.  Registered Dietitian, Tori Park, says "When your dehydrated, it's dehydrating every organ of your body."  That's why before you step foot in the sun, you want to be prepared so bringing a water bottle is extremely important.

Water and sports drinks are not the only thing that can keep you from dehydrating, what you eat can also have a profound effect on your body.  Resident and Mother, Christine Bramer says, "I have apples and fruit for my children.  In the heat I make sure they eat healthy types of snacks."  Other foods that will keep you hydrated include oranges, apples, watermelon, cantaloupe, strawberries, veggies, and yes, even popsicles.

There are also foods and liquids that can have an opposite effect and actually aid the dehydration process.  Lead lifeguard at Fairview Park, Hillary Luckett says people at the pool tend to grab a soda over water.  "A lot of people drink coke and other carbonated beverages which dehydrates them more."  So make sure if you are going to drink a soda, to drink twice as much water as you would normally consume.

So whether you're at the pool, running or just playing sports with friends, make sure you and everyone your with drinks plenty of water.

Doctors and Dieticians say that you should drink fluids before you even get thirsty. If your body is craving a drink, you are already showing the beginning signs of dehydration.  So enjoy the outdoors, just don't forget to drink water before you head out and also bring it along.