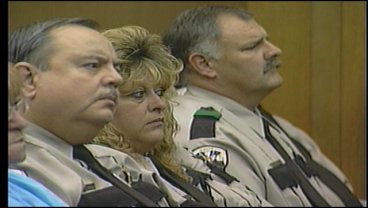 We start with a vote to privatize the Grayson County Jail. It's a decision years in the making. Here's Katy Blakey.

"I think it's time to stop the for-profit, private option and return to the basic concept of expanding the jail downtown," said Sheriff Keith Gary. "Near the courts and avoid the pitfalls we have learned exist with a private corporation."

In front of a packed courtroom Sheriff Keith Gary changed his stance on the jail issue. After years of supporting a private option. The sheriff said he was in favor of remodeling the existing facility.

"I can't tell you how many citizens approached me over the last few weeks."

Gary wanted the choice to go before voters. Give them the option of a bond election and if they turn it down county leaders can re-visit the private plan.

"I am ready and willing and able to assist in this endeavor. Together we can solve the problem that has been with us for many, many years."

But despite similar sentiments in the crowd, including Sherman's Mayor Bill Magers.

"Keep it in downtown Sherman."

Judge Drue Bynum says the Sheriff's office will retain 24 employees at the Justice Center and will work with the private company to provide fair pay and benefits to staff transferring over to the future facility.

"Jailers, if you aren't making as much as you were today- tomorrow, we'll I'm sorry," said Bynum. "But we are going to do everything we can to negotiate your pay. There are 120,000 people we represent in this county and there are 84 of you who work in the jail."

It would have cost around $31 million dollars to renovate the old jail. A price tag that would have gone to taxpayers if commissioners didn't vote to privatize. But even with Monday's vote, Sheriff Gary says he's still fighting for his jailers and his county.

"Obviously I'm somewhat disappointed," said Gary. "I'm sure commissioners think they are doing the right thing. But I'm going to talk to them and see if I can come up with a different solution."

"Obviously we knew going into this we weren't going to appease everybody," said Bynum. "The goal of solving a long-term problem with a long-term solution is within reach today. We can do it more efficiently than we ever have before. And at the end of the day we can have a new facility that we can call our own."