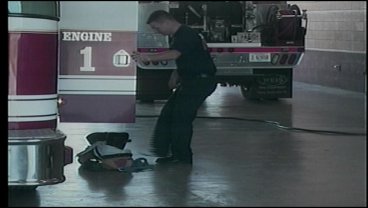 With triple digit temperatures the last few days it seems everyone's struggling to stay cool.  And as many Texoma fire departments continue to battle area grass fires it's important they stay cool as well.  Meredith Saldana caught up with some local firefighters and has more on how they stay cool in the summer heat.

Several Oklahoma City area firefighters succumbed to the heat while battling a grass fire and the Ardmore Fire Department says it can happen quickly, especially during these heat advisories.

As firefighters head out to battle fires this time of year the equipment alone can make them 20-30 degrees hotter than it is for us to be outside in the heat.

Firefighter Chad Mansfield says they try to stay as hydrated as possible during extreme temperatures but sometimes even that isn't enough.

They also rotate crews in and out so everyone can get a quick break and they say thankfully most scenes they're on the Southern Oklahoma Ambulance Service is also there so they have paramedics on hand if needed.

They also cut back on outdoor activities.

Mansfield says, "Yes, on hot days we try to make sure that we stay inside and not do some of our daily activities that we normally do just when we make emergency calls is the only time we'll be out in the heat."

And with grass fires the fire departments can spend several hours in the direct sun battling the flames so the Ardmore Fire Department also has a different set of gear they wear.

It's lighter and cooler than the normal bunker gear they wear allowing the heat to escape from their bodies.