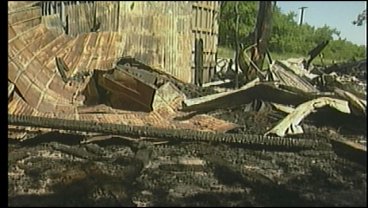 Multiple fire departments were called out to Kentucky Town Road to battle a fire at a barn and grain silo. When crews arrived it looked like a car had run off the road, crashed into the barn and started the fire.

Crews rushed inside, concerned someone was trapped inside the burning structure, but found no one. Neighbors say the fire put a lot of their property and the lives of the fire-fighters in danger.

"There's livestock and open pastures and we could have had some real problems," said Don Miars, who lives nearby.

Crews are not sure how the fire started. They are still investigating.