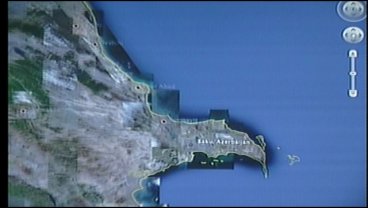 Talk about a trip of a lifetime, a Sherman firefighter is going overseas to train other firefighters in what used to be part of the old  soviet union. KTEN's Deeda Payton met up with him and his wife today.

Nathan Huffman was given this opportunity by the Fire Department Training International, a brotherhood of Texas firefighters. And, he is using his vacation time from the Sherman Fire Department to make it happen.

He's a husband, a father, a firefighter, and soon to be an overseas instructor. On Sunday, Nathan Huffman will go from fighting fires in Sherman to training firefighters in the former Soviet Union. "It's the opportunity of a lifetime and I just couldn't see passing it up."

Huffman is the first of four local firefighters who are going to Baku, Azerbaijan, a republic located north of Iran on the Caspian Sea. It's about a 20 hour trip from Texas to Azerbaijan. And, he will have to make two stops before he gets to the capitol of Baku. And, it's Huffman's first trip overseas. "The farthest I've ever been is Mexico."

His challenge is to train firefighters who work near an oil refinery that produces two percent of the world's oil. He'll teach them everything from rope training to trench rescues. "So they could better faciliate a rescue effort if they did have someone a victim or a person trapped."

"He's very good at his job and he takes a lot of pride in that.." His wife, an emergency room nurse understands why he's doing this. She says she couldn't be more proud, but she will miss him. They've only been married about a month. "I'm proud of him and I'm ready for two weeks to be over with so he can come back and share everything that he's done."

When asked if Huffman has any concerns about the trip, he said, the food. "As far as the food goes I hear they eat alot of chicken and some kind of grass that resembles parsley." But, not to worry. "I've got one suitcase for my clothes and one is for my food.

Huffman will in Azerbaijan for two weeks. We plan to catch up with him as soon as he gets back.