Clean Up Efforts at Sandy Creek 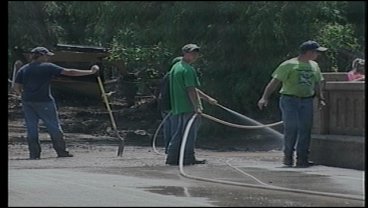 We told you earlier this week about fishermen complaining about the mess left at the Tishomingo National Wildlife Refuge after the rains.  Now, the refuge has started clean up efforts.  Meredith Saldana has the latest.

Although the refuge was able to accommodate the fishermen out at Sandy Creek, it didn't come at a small price.

With tractors, and extra manpower, officials with the National Wildlife Refuge in Tishomingo say it was time to get it cleaned up.

And because of the overwhelming interest from fishermen trying to protect the land, they decided another couple thousand dollars, wasn't too much to spend to restore nature's beauty.

Melissa Holder with the refuge says, "Our intentions were actually to do the work ourselves with our resources.  But unfortunately, the timeline just did not allow us to say when we could or could not be able to get to this project."

So they went the more costly route.

They hired a service contractor with an excavator like the one they were waiting on to come out and get the dirt moving.

"Although it was a little more costly, we were able to accommodate the public and have Sandy Creek cleaned up in a matter of days."

In fact, all they have left to do is clean up the smaller debris that's left on the surface.

Something they say will take time.

But Holder says they just wanted to get the issue resolved and cleared up.

As of Friday afternoon the Sandy Creek area is now open to the public.

By the way, the refuge is federally funded so it's your tax dollars helping with the clean up.